Vacuum killing or Taking out of main ejector 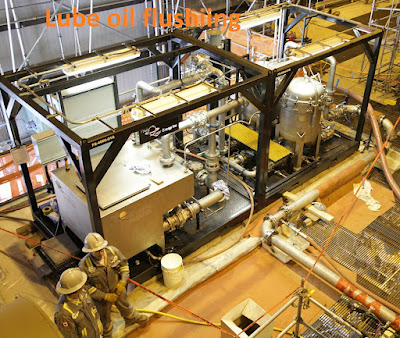 Generally Steam Turbo Get machineries lube oil supply line & control oil lines are of stain less steel & return oil lines are of carbon steels. The oil pipelines fabricated at site are to be cleaned by acid pickling for CS pipelines and by Caustic Soda for SS pipelines.

Before acid pickling the pipes should be thoroughly flushed with air for removing of loose particles.

Acid pickling pipes should be dummied one end with rubber gasket and filled with acid of 5 to 8% of concentrated HCL acid and keep the pipes filled with acid for 24 hours, so that all loos metal particles will come out. There after remove the acid from pipes & clean the pipes thoroughly with water and neutralize with caustic soda.

Fill the 3 to 4% of concentrated caustic soda solution in the acid cleaned pipelines and keep the pipes for 24 hours, so that all acid contents gets neutralized.

Ensure the time between acid cleaning and soda wash should be kept minimal Also chemical solution should not exceed 60˚C. After that all soda washed pipes are thoroughly cleaned/rinsed with water and dry with Air, Lube oil (ISO VG 46) to be applied inside the pipelines to avoid rusting.

Pre-checks or requirements for oil flushing;

Do not use: Flushing oil for final filling of MOT, if required get it tested from authorized party or OEM.

What do you mean by Turbovisory or Turbine supervisory system? 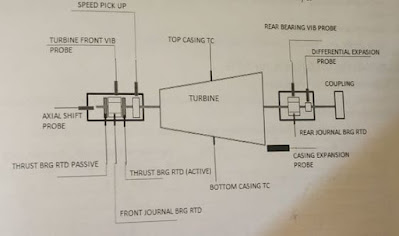 Turbovisory or Turbine supervisory system is the monitoring of a Turbine. It supervises the condition of turbine and informs to an operating person. It also ensures the parameters do not exceed maximum allowable limit.

What is the significance of Turbine supervisory system?

Turbines are heavy & high speed machines, failures of machine lead into unrecoverable losses. So in case of any abnormality turbine should stop automatically. This is taken care by Turbine supervisory system.

What are the equipments or systems used in Turbine supervisory system?

Vibration probes: These probes are used for sensing shaft or bearing casing vibrations. Generally two probes are fitted at 900 apart at X & Y-directions to measure the shaft vibrations. These vibrations are measured in microns, mills or mm/sec.

Speed probes: Speed sensors are generally Magnetic Pick up unit (MPU) type. These are fitted at teethed portion of turbine shaft for measurement. Generally 2 MPUs are used to measure the shaft speed, one for speed sensing & other for controlling.

Axial shift probes: This probe is fitted at the turbine front end to measure the axial displacement of shaft. Axial displacement probe of the shaft is generally set between +/- 0.4 to +/- 0.6 mm.

And also the difference between top & bottom casing temperature of turbine should be very less.

ESV opening indication: This is used to indicate the actual position of valves.

Eccentricity: This is very important supervision system. This is used to measure the mechanical bow. This may happen due to sudden trip of turbine & unavailability of barring device. Standstill position of turbine rotor for long time

Why do vacuum breaker valves are provided on steam condensers?

During tripping of turbine due to any of the above reasons like bearing vibration, temperature, axial shift, differential expansion etc, the vacuum breaker valve opens to bring down the turbine rotor speed to zero at the earliest time

1. What do you mean by Turbine commissioning?

Turbine commissioning is the process of start-up of newly installed Turbine auxiliaries & Turbine up to satisfactory level.

2. When and how do one shall conduct commissioning of Turbine?

Turbine & their auxiliaries are commissioned after proper install, checking & trials. And it is commissioned under the guidance of OEM (Original Equipment Manufacturer)

3. Write down the sequential steps involved in Turbine commissioning

4. Write down the various steps involved in steam blowing

For Target Plate Made of Aluminum:

The piping considered clean if there are not more than 3 (Three) pitting of 0.5 mm to 1mm dia. in center area of 25 mm X 25 mm and shall not have any deformed edges. Besides this there shall be no pitting in the rim zone. Pitting below 0.5 mm may be ignored.

For Target Plate Made of Stainless Steel:

The piping is considered clean if there are not more than five pitting of 0.1 mm dia to 0.5 mm dia. in centre area of 50 mm X 50 mm & shall not have any deformed edges. Pitting below 0.1 mm may be ignored

Then normalize the steam line

5. Write down the sequential steps for Steam line charging.

Following steps shall be followed during steam line charging:

6. What is the significance of steam blowing?

7. What are the sequential steps involved in Turbine oil flushing?

Following are the steps

8-What are the steps involved in cooling water system commissioning?

9-List down the sequential steps involved in condensate line flushing

10-What are the sequential steps for turbine rolling? 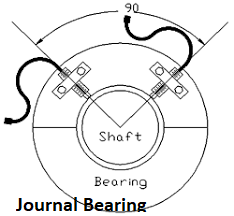 Unbalance is the uneven distribution of body mass in rotating machine.

3. Looseness in turbine base bolts or foundation bolts leads to radial vibrations

Read what do you mean by turbine supervisory system???

Seal rubbing with rotating parts like rotor or blades to vibrations in horizontal directions.

This rubbing may due to improperly mounted seals or eccentricity of seals.

Bearings vibrations are high in radial direction if bearing is defective in respect to pitting, wear, cracks & more clearance.

This leads to the vibrations of journal bearings in axial directions

If the quality of steam changes for an example, reduced steam temperature, wet steam etc

If the turbine is loaded beyond the allowable capacity for long time without consultation with OEM can certainly lead to bearings vibrations & subsequent failure.

18. Other probable reasons for bearings vibrations are 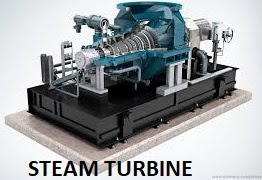 ·         Check all turbine interlocks and protection of turbine.

·         Start AOP and fill up the overhead tank up to normal level. Put the EOP in Auto mode.   Maintain the oil temperature within the range of 40 to 45 deg C by MOT heater on, if required. Cut off the MOT heater manually after getting 40 deg C. (Note: The minimum oil temperature for turbine start up is 25 deg C as per OEM manual). Keep stand by AOP in auto made.

·         After getting the above said temperature, start Vapour Extractor fan then start JOP. Ensure its normal discharge pressure i.e. 150 kg/cm2.

·         Put the TG on barring gear and at this speed, record vibrations & temperature at all bearing points.

·         Ensure TG runs on barring gear at least 1 hour prior to rolling. (Note: Prior to start up the steam turbine, the turning gear is operating for at least 25 minutes as per OEM manual).

What do you mean by turbo supervisory system???

When after a clearly detected tripping the causes is eliminated or when the turbine is shutdown intentionally, observe the following for standstill’s longer than 5 minutes up to max. 8 hours

Refer the Warm Startup Curve given by OEM

SOP FOR TURBINE HOT START UP

Refer the Hot Startup Curve given by OEM